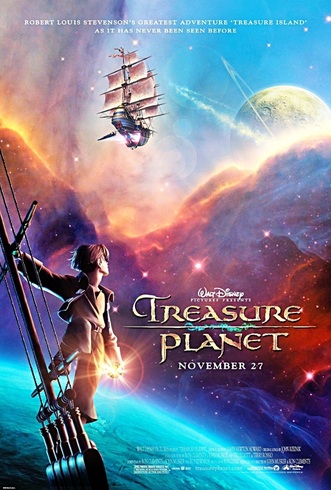 Minor Plot hole: Rules can be bent sometimes and this is an exciting set piece in an admittedly very fictional world, but I can still count it. A star the RLS Legacy encounters dissolves into a black hole and begins to suck everything in. Then, some random waves begin to exude from it which the Legacy can ride to escape. Black holes do not emit anything – they have a gravitational pull so strong that nothing can escape. The crew of the Legacy would’ve been doomed the minute the black hole appeared.

Minor Plot hole: When Jim and Silver argue over Morph, who holds the map, to come to one of them, Morph instead whizzes into the center of a curled up rope. Jim reaches inside to grab the map and runs off. We later find out he actually grabbed Morph in disguise by accident, but Silver assumes Jim has the real map. So, when Jim grabbed the apparent map, Silver didn’t wonder at all where Morph went and never thought to check the little gap in the rope? No? We’re just continuing the theme of low IQs, yeah?

Minor Plot hole: Despite Silver triggering the alarm as soon as he enters the core of Treasure Planet, it takes a while for the explosives to even begin to detonate. Any normal person could enter, steal as much as they could carry and leave in good time. Why did Flint leave such a delay in the timing?

Major Plot hole: Flint rigged a complex system of explosives in the core of Treasure Planet that are set to detonate when intruders enter the area. So, after probably taking years to complete such a huge task, how does he make it activate? Through a clearly visible red security line positioned right by the entrance of the lair. What a waste.

Major Plot hole: In fact, why does Flint set up such a complex system of explosives to kill intruders when all he wants is to make sure the treasure is always his? Why not bask in it’s loveliness for your entire lifetime and when your end approaches destroy all of it so nobody ever finds any trace of it? It just seems to be glossed over in order to make the climax seemingly make sense.

Major Plot hole: Let’s continue with Flint’s stupidity! If all he wanted was to make sure people never took his treasure, I’ll first have to accept that he kept it there even after his death. Now that I have, why does his complex system of bombs even exist? Seeing how futuristic all this technology is, why not create guns by the door that kill intruders so the treasure remains untouched and unbombed? Why not create robot guards programmed to also kill intruders? He made B.E.N, the most irritating robot of all time, so it can’t be hard. Can it?

Major Plot hole: When Jim returns with B.E.N after disabling the laser cannons on the RLS Legacy, he finds all of Silver’s crew already there with the captain and doctor taken hostage. When ganged up on by the other pirates, one of them yells ‘thanks for showing us the way in boy!’, referring to him and B.E.N revealing the hidden back entrance of the hideout for them to sneak into. But…why was this necessary? They are a heavily armed crew against a teenage boy, a humanoid cat and dog and a fucking annoying robot. Why did they need this secret entrance? Why not just break right in through the main entrance? They were fully aware that Jim and the others had no backup, weapons or protection. It’s stupidity at its finest.

Major Plot hole: Despite all this futuristic technology, the RLS Legacy has no security cameras to keep an eye on the crew in case they, I don’t know, plan a mutiny or kill the first mate and blame it on the cabin boy. Captain Amelia even indicates that she does not trust the crew yet she’s perfectly okay with leaving them unattended to discuss their plans.

Plot contrivance: You might think the security explosives worked and so that a prior major plot hole is irrelevant. But this just creates another issue – how did the Silver and the crew not see the laser? It’s not like it’s even right by your feet as you enter. An overhead shot of the last of the pirates entering shows there is so much room between the entrance and the red line that you would see it in your field of vision when entering. Sorry to get scientific, but it’s annoying!

Plot contrivance: Captain Flint removed B.E.N’s memory circuit in order to avoid him revealing the truth about Treasure Planet. Being a genius, he held the circuit in his hand as he died and did nothing to B.E.N himself. To spare us the ”annoyingness” of Martin Short and avoid messing up the whole plan, wouldn’t it have made more sense to just destroy B.E.N so there is no possibility of the secret ever getting out?

Plot contrivance: I understand it’s part of the steampunk aesthetic that the film adopts, but it is absurd to assume that in this futuristic sci-fi world we’d actually use regular ropes tied to a wooden mast to prevent the crew from falling off the ship during hectic situations. Nothing a bit stronger, like a gravity sciency thingymajig? Okay, I don’t know anything about this sort of stuff, but isn’t a rope a highly flawed thing to use when you’re getting pulled into a black hole?

Unaddressed issue: The doctor claims the complexity of the treasure maps locking mechanism is out of his knowledgeable reach yet Jim is able to open it within seconds of use. It is never explained how he knew this and no other character appears able to match it.

Unaddressed issue: It is never explained why B.E.N exists. That’s not me having another shot at Martin Short’s goblin voice, but seriously, why does he exist? In the original story of Treasure Island, Ben Gunn was a man left to die on Treasure Island for being unable to find the treasure like he promised to his crew-mates. Here, Flint stole treasure from across the galaxy and used Treasure Planet as a place to store it for his own good. He created B.E.N, but why? What use did he serve? Did he read the scripts first draft and think the film needed comic relief?