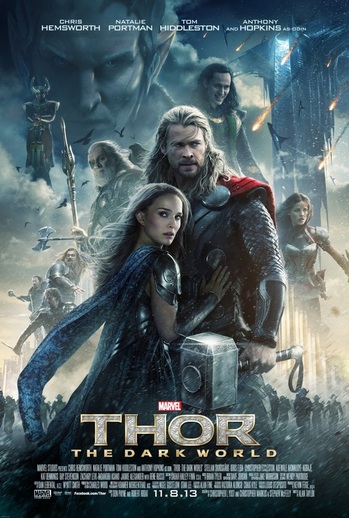 Minor Plot hole: To show how dimwitted the Asgardians are – follow closely this example:

Imagine you are one of the dozens of security check-points in a maximum security prison in your country – one of the criminals that appear in front of you has armor and a wooden mask that clearly looks alien to you. What would you do?

In any real life-scenario – all these steps would be followed. But not in this movie, the gods of Asgard believed to be above humans in almost every way let an alien from a race taught to be extinct enter their prison in full armor without identifying him. They got quantum mechanics mumbo-jumbo and yet failed to identify Algrim, the only black Dark Elf in the universe who was also trying really hard to conceal his identity by showing-up in a full Dark Elf gear that was not seen by any Asgardian eye for the last 5000 years! How was it possible for this guy to get in prison with any element of surprise?

Minor Plot hole: For about 5000 years, the Asgardian military technology did not evolve in the slightest. Their Dark-Elf counterparts who were in suspended animation for exactly 5000 years still have the upper-hand with a ridiculous concept called ‘’long-range weapons’’ where they can shoot Asgard foot soldiers with laser guns and dimension-ripping grenades while Asgard tried to defend itself with daggers and shields. Funny thing though, Asgard has long-range weapons on their ships – but Dark Elves ONLY uses knives-shaped ships for close-quarter-combat in the sky. Wtf?

Major Plot hole: If Frigga can make illusions of everyone, why didn’t she make an extra illusion of herself to complement the illusion of Natalie Portman she made to protect her from Malekith? Clearly she had the mental capacity to do it (similar to her son Loki) – why was the logical capacity lacking? Oh right, she had to die so the movie could unite the brothers in a vengeance plan!

Major Plot hole: We don’t know much about super one-dimensional Malekith – but we know one thing: he loooves his Aether! After 5000 years of deep sleep in a nightmare BDSM machine, Malekith wakes-up the minute the Aether finds a living host and he seems to know exactly where to find it even if it is hundreds of galaxies away. But somehow, when he is finally right beside the source of Aether (that he can sense from billions of kilometers away), he can’t feel that the Jane in front of him is a decoy illusion created by hot-mama Frigga. How ? On every other occasion in the film – Malekith knows exactly where Jane Foster is….why not now? Perhaps for a cinematic surprise that is ultimately nonsensical.

Major Plot hole: Why did no one from Asgard help Thor while he was fighting Malekith in London? They have a machine that can teleport people right beside him. The World was on the edge of destruction – clearly they could have sent a few hundred soldiers or EVERYONE THAT IS ALIVE IN THEIR KINGDOM to save the Universe. It seems they misjudged the scope of their mess – if Thor fails: everyone dies. This is clearly the highest stakes the whole Marvel Universe has ever faced and you would think his good friends like Iron Man and Captain America and all the others who clearly had less important problems than saving the whole complete Universe from being plunged into Darkness by one metro-sexual Elf in Europe would show-up to help. Clearly everything else, by definition, is of less importance. Major Plot hole: It made no sense for Thor to go after Malekith. He overestimated the force of his enemy and he underestimated the potential cost of his failure. The contrast is so evident that no one would ever dare try it – except our main character of course. Let’s look at it:

Enemy’s forces: One dude with a single ship of Elf soldiers where most of them were killed in the assault on Asgard. Their assault was originally successful because it was a surprise attack. This is no longer possible. Furthermore – if another attack occurs – Malekith won’t be able to send a lot of sword-ships since most of them are already destroyed.

Potential cost of failure: If Thor fails to destroy the Aether once it is extracted from his one-dimensional love interest – Malekith starts his Armageddon and everything that is alive in the Universe dies.

Thor’s plan: Destroy the Aether with his hammer – even though he has no tangible way to know if he actually as the strength to destroy it (considering his grand-father failed) and plans to use his brother who betrays more than he breaths.

This is a rather simple risk-analysis situation. Yes, it is possible Jane (his love) might die if she keeps the Aether in her veins for too long – but risking the whole Universe for a plan that is doomed to fail is simply preposterous. In fact the whole conflict is not resolved by Thor – but by naked Dr. Selvig who somehow managed to beat all other scientists in the Universe to create a way to manipulate portals to dismember the Aether-infused Malekith. If that doctor didn’t SOMEHOW create this magic science thingy – Thor would have lost and everybody else. You think this is stupid? Wait until what comes next!

Super Plot hole: Throughout the whole movie we see Malekith desperately trying to find the Aether and absorb it so he can destroy all the lights in the Universe. Ok, funny thing though that in the prologue where he is attacked by Asgard soldiers and Odin’s father, he is actually right beside the Aether. He only needed to absorb it and the Universe was done for.

He instead chose to look at the dangerous battlefield where his forces were sacrificing their lives to protect him from soldiers with the technology to teleport anywhere on the field – let’s say right between him and the Aether for example. Then this likely scenario happens….he loses the Aether and ultimately the war. But he didn’t have to lose – if he absorbed the Aether simply one moment before he finally decided it was perhaps maybe a good time to get out of his vegetative state and do something – he would have won. The movie was over 2 minutes after it started and the screenwriter didn’t notice.

Plot contrivance: So the Universe’s convergence that happens once every 5000 years happens (1) in 2013. (2) Dimensional portals show-up in London a few kilometers away from Jane Foster, (3) the kids who first find the portals in an abandoned factory never get sucked into it while Jane does hours later, (4) of all the places in the Universe where this particular dimensional portal could lead her – Jane is transported right beside the Aether. If any of these 4 elements was not present- Jane would not have become the Aether’s host. I don’t think you will find a bigger contrivance in any movie in the next few years. Plot contrivance: When an alien spacecraft invades London – the best the British government can come up with is a pair of fighter jets – escorted by absolutely zero police officers and federal agents. It’s almost as if London has barely any pedestrians in its street – similar to a Disney movie set for example!

Plot contrivance: By structural engineering definition, pillars are supposed to transmit the weight of what is above them to what is below. This is probably different in the ‘’made-that-up’’ kingdom of Asgard where a single ship destroys 80% of all pillars in a room that has nothing but pillars and yet nothing happens.

Plot contrivance: If 4 enemy spaceships are sent to attack Asgard’s palace – you can be sure that if only one spaceship makes it to its destination it will be the ship with the main leader in it – even if it is the same ship with the same kind of pilots.

Retroactive continuity: In this movie, Loki demonstrates the ability to make himself look like other people, make other people look like other people, and even change the look of his entire prison cell in one scene. This is an ability that he has not only never used in Thor or The Avengers, but also an ability that would have been incredibly useful in a past number of situations, such as making himself look like an avengers (which he even did in this film). If it’s something he gained suddenly, when did he gain it? He goes straight from being arrested to put in his cell, how did he find the time to learn this new and very useful power?

Unaddressed Issue: Dimensional portals are said to create fluctuations in gravity – and by that they mean fluctuations in the gravity exerted on cars and nothing else. Twice in the movie do we see someone turn a truck upside down because of these ‘’fluctuations’’ and nothing else is ever affected by it. What is so special about these cars? And can we get the prescriptions drugs the screenwriter is having?