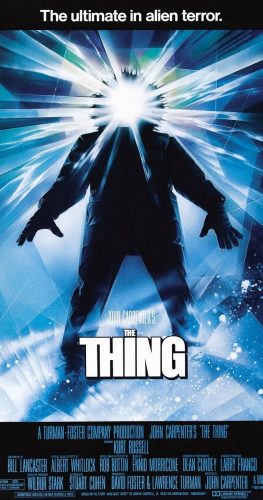 Major Plot Hole: The creatures called “the Things” are killed by burning them with flamethrowers. Despite the fact that almost the whole team consists of scientists, they ignore one important fact. Fire can only destroy the exterior cells of the creature, not the interior ones, which means that these cells can regenerate or still be able to transform people into Things.

Minor Plot Hole: The main researcher in the group, Dr. Sander Halvorson, says that his dental crowns are made of porcelain, which is why someone should have checked if he had fillings (the Thing would not replicate metal dental fillings) and find out whether his teeth were “real” ones. In fact, porcelain dental prostheses and crowns were very expensive and rare back in 1980’s. Of course, the doctor could be deep-pocketed enough to afford them, but, most likely, he would have standard silver crowns or amalgam fillings. P.S.: If they scrapped the filling with a metal object, they could define whether they were made of porcelain, or there was an alien with regenerated jaws.

Unaddressed issue: After helicopter crashing the part of the team who tried to evacuate died, because an alien appeared to be on board. However, later we see two survived people who made their way back to the camp on foot in cold weather and a blizzard. It wasn’t explained how they survived in the crash and how they managed to find the path to the polar station in such weather conditions.

Unaddressed Issue: The actions that took place in the film were supposed to precede what happened in 1982 film, but almost everything that occurs in the film doesn’t match what was revealed later on. For instance, the fact that two women were present in the Norwegian team on the polar station.