The Devil Inside Plot holes  (by Martini Shark) 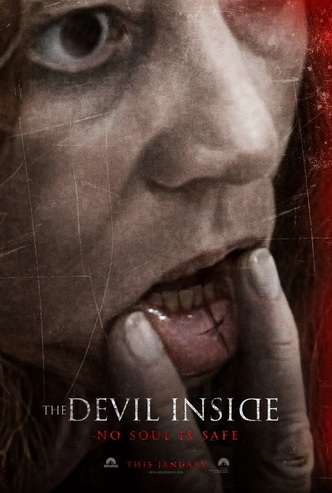 Major Plot Hole: One of the story points concerns both the occurrence of multiple demons having the ability to occupy a single body, and the demons having the ability to use “transference” – moving from one host to another – in the course of an exorcism.  The priests are the ones delivering this exposition, repetitively with strength , during the film.  However, later we witness a scene of transference and the same priests who instructed us on this activity are having an anal nervous breakdown while this is taking place.  Super Plot Hole: Much of the film surrounds the priests enacting exorcisms and doing so on the sly.  They mention how the Church has worked at shutting the practice down since 1999.  The priests talk about how they are doing these without consent and that they can get in serious trouble if they are found out.  Yet the entire film exists because they document everything they do and allow all of their activities to be videotaped.  Also, if the Vatican was putting an end to this why was there an exorcism class instructing on the practice?  Best of all these classes are shown to not only be easy to walk into, but for something so secretive they video recorded their visit as well. Is this movie trying to tell us that all priests are idiots ? It’s anti-christian ! Unaddressed Issue: The central character possession involves a mother who is institutionalized after killing some church members.  She is possessed while held in solitary in a mental hospital.  Is this a viable method of demonic entities?  It would seem that if demons wanted to occupy humans to enact their will on the planet they might choose better than to inhabit the form of somebody locked away and kept from interacting with others. People either famous, or in positions of power, would make for a more influential vessel. An anonymous housewife locked up in solitary confinement and doodling with her own shit strikes as being a dead-end route. Is this movie trying to tell us that all demons are idiots?  It’s…..It’s. It’s Racist !!