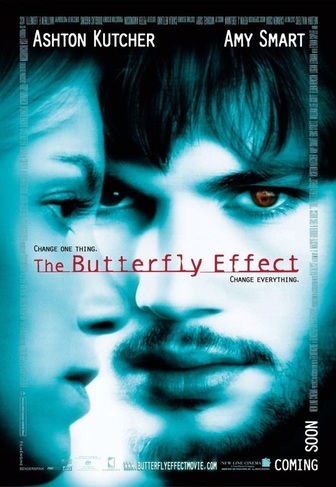 Minor Plot Hole: It can be argued that the first jump is actually when Evan goes back to Lenny burning the dog, but this is not correct. There are two possibilities for how this jump could have worked. First scenario assumes that the blackouts were caused by the time traveling to create a loop. If that were the case, then the memory had not happened yet so he would be trying to remember something in the future which is impossible. There should have been no flashes of a car or anything. At the end of the hypnosis you can see that the blockbuster had gone off. He shouldn’t have been able to remember that. However when we factor in how he burned himself with the cigarette the next time he jumped there, we can assume that this was just a normal blackout (he didn’t burn himself the first time, so by going back he changed things.) If that were the case then he should have had no problem remembering it. Super Plot Hole: When Evan is in prison he needs to prove his cell mate that he can talk to Jesus. He does this by going back to preschool where he drew that disturbing picture. So far it all makes sense. But then he stabs his hands on two pointy things. But he did not do that the first time. That should mean that he would need to visit that point in time twice, yet the first time he goes there is never shown. But that’s not even the biggest problem. Why do the scars on his hands only show up in the present? Wouldn’t they have been there the whole time? By this logic, he stabbed his hands, had no scar, then suddenly many years later scars magically appeared. Even bigger than this, we have to assume that by stabbing both of his hands like a maniac, he does not change the future. Clearly he created an event that would change his life forever. Her mother, friends and neighbors would have treated him differently and thus completely change the way his life played out. He would simply not be in prison in front of the same inmate.