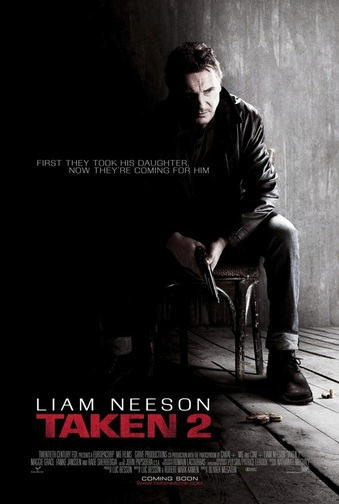 Minor Plot hole: When Liam Neeson calls his friend Sam in the United States – it is both day time in Istanbul and Los Angeles. Congrats! You officially don’t give a fuck! This could also be looked-up in less than 30 seconds on Wiki.

Minor Plot hole: When the Albanian terrorists surround Liam Neeson and order him to lower his weapon before they blow his wife’s brains out – not a single one of them seems to care that Liam is not only resisting to lower his weapon for 30 seconds but also taking out his cellphone to call someone. Since he is an FBI agent – letting him call probably doesn’t mean trouble for any of them right? He obviously ends up calling his daughter but that’s a different issue. When Liam is done with his call, he lowers his gun and the terrorists are back in the world of consciousness and swiftly take him down.

Minor Plot hole: So Liam calls his daughter to tell her that men will try to kill her and that she should hide in the wardrobe of his second hotel room. That’s cool – except his second secret room is right beside is non-secret room, probably under his name, and Kim doesn’t have the key to get in. How was that supposed to work? Liam Neeson can thank God the one Albanian terrorist with lazy eyes was the one in charge of inspecting wardrobes – or he would have seen a pair of freshly shaved legs  hiding behind a shirt.

Minor Plot hole: Kim goes full-Rambo in Istanbul – throwing grenades left and right to find her dad – and not a single police car or firetruck siren is heard following the random terrorist attack. When Kim is finally reunited with her dad, everyone in the streets is totally nonchalant about the fact that 3 random devastating explosions burned their surrounding buildings.

Minor Plot hole: Liam Nesson explodes the American embassy with his taxi because brakes are apparently not available in Turkey. He promptly announces to his daughter that she is now safe and tells her he has to get going to save her mother. Funny enough, Liam does not ask for any help from the few posted American soldiers there. Funnier enough, those same guards also don’t seem to follow international law and arrest Liam Neeson on sight before he causes more trouble. The movie simply implies that both parties just walked past each other awkwardly evading eye contact like horny frat brothers after a heavy-drinking party where women didn’t show up.

Minor Plot hole: Oh no! Liam Neeson is captured. Good thing he is similar to a super computer that can record all the surrounding audio of a loud caravan while brilliantly assuming that all the sounds he hears will be occurring in perpetuity in a motionless world – like a bird signing, an old man playing the guitar and a dog barking. But he ends-up being right because logic committed suicide a long time ago barely 20 minutes into the movie.

Major Plot hole: The Final boss of the film is a little disappointing considering that he carries no guns of his own amongst an army of deadly armed men. But the real problem comes in later while his best henchman is dueling Liam Neeson on top of a miniature Mortal Kombat arena. The final boss is neither trying to find a gun to help his last standing man survive nor trying to escape while his enemy is busy. I mean logically he should take one of the two. This pushes us to add a third option to this old saying: fight or flight or go full retard.

Unaddressed Issue: How exactly can the movie have a good ending? The family is back together in a café enjoying life and we have to assume that the dozens of killed Albanians, destroyed Istanbul property and countless law violations did not matter to the Turkish or American governments. Is the final scene of the movie a day or five years after their vacation? Because the second scenario sounds more plausible.