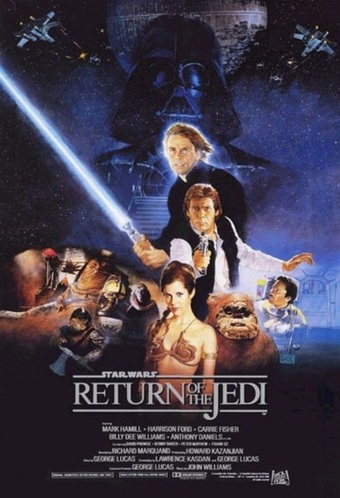 Minor Plot hole: The destruction of the second Death Star would inevitably lead to an Armageddon on Endor. The explosion of a small artificial moon in low orbit would send a meteoric rain that would make Old Testament God blush and kill all the Ewoks in the most epic and gruesome whack-a-mole game the galaxy ever witnessed. Those who would be lucky enough to survive the initial storm would slowly die after the tons of smoke in the atmosphere create a nuclear-winter effect – depriving them of food and pure air. It is ergo my pleasure to announce you all that, logically speaking, all the Ewoks you saw in the movie should have died in horrible agony. Oh, and the rebels as well. In fact, only Lando and Luke of the main cast would have survived.

Minor Plot hole: On Endor, the Storm troopers are so fucking ELITE that they don’t need radio transmitters. No, when they want to talk to their main base about anything, let’s say: an incoming surprise raid, then they have to hop on super-sonic bikes and travel through a racing track that would make Mario Kart’s rainbow road look like a pussy.

Major Plot hole: The Elite Storm Troopers on Endor are incapable of beating midget furies. It would be similar of an aberration if we took the best soldiers America has to offer right now – send them in the past to fight spear-wielding Barbarians– and see them lose. Except that in this movie, the soldiers also have futuristic armor, laser guns and robots, while the barbarians are 40-pound hairy midgets. It makes no sense.

Major Plot hole: One of the greatest stupidities of modern cinema: the Empire builds a second death star with the same incredible design flaw: a straight path to its reactor that if blown up: destroys the whole station. No one really likes to talk about this plot hole. It’s like a family that knows that two cousins are having sex – everyone knows it’s bad but they don’t say anything about it. Unless you are from Alabama – that grants you a few high-fives.

Major Plot hole: Luke’s plan sucks ass. The only reason his rescue attempt worked is because R2-D2 was positioned on top of Jabba’s ship to launch his lightsaber. Cool, and what would you have done Luke if that little dwarf in a can-costume didn’t show-up on top of that ship? What if Jabba thought R2 was a shitty robot and broke it in hundreds of different pieces to make a giant sex toy for his lonely Rancor? What if Jabba scanned the robot and saw it was hiding a lightsaber? (Does that mean R2 could have carried 1 ton of C4 in his rectum and not get found?) What if you were dropped in the sand vagina with handcuffs? What if the ship was simply too far for R2 to even reach you with his lightsaber throw? If this is the best plan you can prepare with a few months of preparation – I hope the Rebel alliance votes to legally neuter you.

Major Plot hole: The Emperor has less survival instincts than a fucking dodo. He is slowly killing Luke with his lightning bolts; Vader then takes him up – walks toward the reactor shaft – and throws him down with no resistance on his part. Why didn’t the emperor react? In fact, it’s not like Vader had that much grip on him having only one hand. The Emperor had a good 10 seconds to do anything – and he chose to play a statue.

Plot contrivance: The Emperor is the worst trickster of all time. His whole plan to not completely destroy the Rebel troops in space is to get Luke in an angry mood to push him towards the dark side of the force. That’s pretty cunning – but why tell your plan to Luke every chance you get? ”Take your weapon. Strike me down with all your hatred and your journey towards the dark side will be complete!”. Why would you say something like that? Why would you tell Luke exactly what was in store for him if he followed your manipulation? You’re lucky Luke was a retard; or perhaps you’ve heard of his great rescue plan on Tatooine and planned accordingly.

Plot contrivance: Yoda dies 5 minutes after Luke shows up to finish his training. Right before Luke entered his hut, Yoda was standing – not sick in his bed mind you – and making himself a nice soup. This means only one thing: Luke has airborne space aids.

Unaddressed Issue: Yoda tells Luke that his final test to become a Jedi is to beat Darth Vader – who is himself one of the strongest beings and Jedi in the galaxy. What kind of test is this? Did Obi-Wan have to beat Yoda to become a Jedi too? That seems unlikely. When you apply to be an airline Pilot, do you have to beat an Ace F-22 Raptor in a dog fight over the pacific to finish your training?