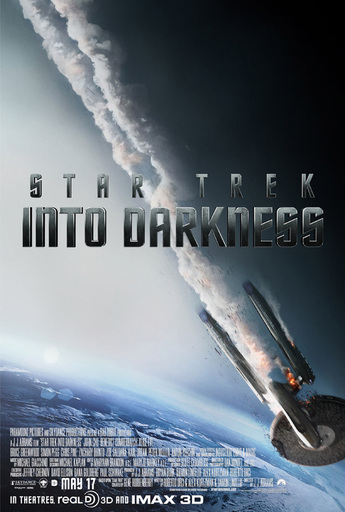 Minor Plot hole: So Star Fleet is victim of a terrorist attack that kills hundreds of people in London. An emergency meeting is called on top of their HQ building and it also gets attacked by Khan the minute it starts. Does it seem believable for you to imagine a helicopter successfully going in front of the oval office to attack the President just after a deadly terrorist attack? It’s already incredibly far-fetched and stupid in our time – how are we supposed to describe a similar situation 300 years in the future with an exponentially better technology? Are we to assume Star Fleet HQ has no way to know if a rogue airship is going to mow their members down? No security measures – no sensors – no radars: just pure undiluted shit.

Minor Plot hole: The Enterprise gets pushed-out of warp speed by the USS Vengeance 237,000 km away from Earth – which seems far until you realize it’s the distance between the moon and the Earth. This brings the following problem: Star Fleet could detect two of their ships fighting each other right around the planet….and they didn’t care. Yeah Admiral Marcus is a high-ranking official in Star Fleet, but what was his plan exactly after coming back to Earth when everyone will have seen him obliterate the USS Enterprise even though it didn’t fire any single shot at his own ship? Seems rather short-sighted.

Major Plot hole: There is no way Scotty could get on Admiral Marcus’ Dreadnaught military spaceship. Yes – he is the comic relief of the movie but that does not mean all logic should be thrown out the window every time he is on screen. His tiny spaceship hovers around the Dreadnaught’s space hangar and (1) no one spots him. He talks on his radio to Kirk and (2) no one spots the transmission. The hangar opens-up and (3) not a single spaceship spots him on radar or with their own fucking eyes as he joins the line of ships that never saw him before. He gets inside the dreadnaught and (4) again, no one notices he is an outcast which is even more peculiar considering the limited crew. He screws-up the weapons of the ship, the crew knows exactly where he is and (5) a single dumb-ass guard finds him and is still not convinced he does not belong on the ship even if he is the only one with a shirt that doesn’t match the USS Vengeance’s attires. Seriously, any of these 5 occurrences of retardedness is impossible on its own and we got five of them.

Major Plot hole: Kirk dies. Bones realizes that there is one way to save him: inject him with Khan’s space-Wolverine blood. Or you know, any of the other 72 super-humans in cryo-sleep right beside the god damn medical bay. But that doesn’t bring any tension or an excuse for a cool boss battle on top of flying cars.

Major Plot hole: Admiral Marcus wants to create military weapons because of his raging hard-on for war. Problem is – Star Fleet is more about peace and discovery than intergalactic conflicts so he decides to bring someone frozen from the past to lend his nasty mind to the plan. His choice? Khan – a super-human frozen for more than 300 years. But wait, if the movie takes place around 2260, that means Khan was frozen in the 1960s. What the fuck would this guy know about phasers and warp-drives and spaceships if he got frozen right around the time humanity sent its first human in space? One other thing: did I miss something or cryogenic technology doesn’t exist right now and even less so in the 1960s? How could Khan be successfully frozen in an era where refrigerators were not always successful at keeping Cheez Whiz cold for more than a week?

Plot contrivance: The first time Scotty blasts Khan with his phaser – it knocks him out for a few seconds. When it’s Uhura’s turn with the same phaser – she needs to shoot him a dozen times in the chest before he remembers it can knock-him out. Is J.J Abrams trying to send a misogynistic message here?

Plot contrivance: Transporter technology in this film series is a script contrivance in its purest form. They are supposed to be able to pretty much teleport anyone to anywhere with it. And yet Spock can’t be beamed-up on the Enterprise while inside the volcano for whatever reason, Spock/Kirk/Uhurra can’t be beamed-up on the Enterprise while inside their shuttle before being potentially executed by Klingons on Kronos. Later, they can’t beam-up Khan on their spaceship but can beam Spock down there. Whatever needs to happen or not to happen to add drama will be justified by saying the transporter is having a specific malfunction or whatever.

Unaddressed Issue: What happens with the Klingon? One moment it seems there is an inevitable war coming our way with them – then Kirk and company blast the shit out of 30 of them on their planet – and then they are never mentioned again. You would think the Klingons would be pissed about the death of dozens of their soldiers by human weaponry. And since the ending of the movie is set more than a year after the original Klingon massacre it seems even weirder.

Unaddressed Issue: Spock is against the violation of the Prime Directive. This is why he is against intervention in the lives of other developing species. So he is against showing the USS Enterprise to the Nibiru people but totally fine at blasting a cold-fusion bomb in the volcano near them. Isn’t the Prime Directive about complete non-interference? Because that cold-fusion bomb is interfering a lot. Speaking of non-interference, why did they put the Enterprise in the sea? Doesn’t it make more sense to keep it in space – like a space-ship – and send a small shuttle to Nibiru?

Unaddressed Issue: Khan teleports to Kronos. Instantly. But the Enterprise needs to warp there. Why? Starfleet also has the technology – and an elite force of commandos that could take Khan out. Why didn’t Kirk realized this when they took days to prepare their space ship for travel. Yes Admiral Marcus wants war, but Kirk is a dumbass for not realizing this alternative – the same can be said about Spock.