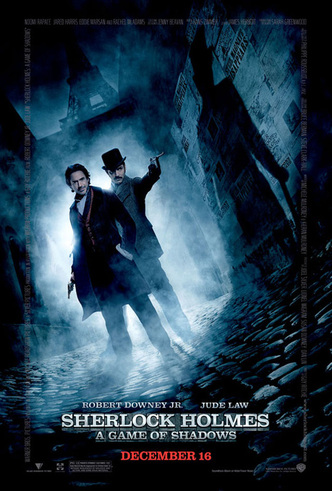 _ Minor Plot hole: A bomb explodes in a Hotel leaving no survivors. The bomb is so strong that all the glass windows exploded on impact. Somehow, Holmes and Watson are able to forensic the shit out of the Hotel room to understand that the bomb was a cover operation to hide a sniper assassination that happened a few seconds before the bomb exploded. How did they find out? Oh. Real simple. You see, they found a bullet hole in a glass window on the right of….Wait. Something sounds stupid. Could it be the fact that….. all windows shattered to dust after the massive explosion and that there would be no way to spot a bullet hole in a glass that doesn’t exist anymore? No. Not that. I know what sounds stupid! Why blow a bomb to kill everyone in a room as a cover-up operation for an assassination that would kill the same man?The cover-up operation was way more effective alone. Contrived Plot point: Holmes meets his match in this movie. An individual at least as brilliant as him: Professor James Moriarty. But he has his own limitations – he can’t remember everything. Well, he can play chess from a mental image in his head, but somehow, his god-like intellect can’t remember all his war-profit operations by heart and he thus needs to write a few things down in a personal notebook. Fair enough, we can let this one slip. Moriarty is later defeated by Holmes mainly because he was able to switch his notebook with a fake, and send the original one to the police in order to stop Moriarty’s war plans. So it means Sherlock Holmes made an incredibly huge gamble. He had to assume 4 important things: If any of those 4 assumptions on his super intelligent nemesis failed to become reality– Holmes would have lost. Contrived Plot point: Sherlock Holmes disguises himself as the most scary-looking shemale ever seen inside a non-Thai train and no one, not even the military officers who talk directly to him, realize he is a man. Which gives a tone of complete farce and comedy to a movie that takes itself very seriously – hence destroying all the future attempts to make the audience believe in the seriousness of the plot.