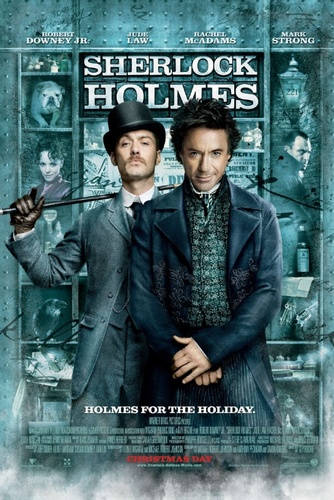 Minor Plot hole: Sherlock Holmes meets  his love interest Irene Adler in her apartment at the beginning of the movie. He is tricked by drinking a drug from what appears to be a sealed bottle of wine. This situation would be rather hard to solve. However, we are meant to believe that Sherlock Holmes who is in the presence of the only person who outwitted him twice before would trust a cup of wine before she takes a sip herself.

Major Plot hole: Lord Blackwood fakes his hanging execution at the beginning of the movie. So obviously, Dr. Watson who is in charge of confirming his death will take his pulse instead of checking if the rope really broke his neck.

Major Plot hole: When Lord Coward brings Sherlock Holmes in his office in order to kill him, he decides to turn his back on Sherlock, stares at the wall for at least 15 seconds, and is then surprised when Sherlock engineered an escape plan while he was busy looking retarded.

Major Plot hole: When Sherlock  blocks the chimney in Lord Coward’s office in order to hide in the smoke, he decides to continue talking to Lord Coward who could have simply spotted the origin of the sound and shoot him. However, Sherlock seems to have the power of a Dolby surround sound system in which he seems to be able to speak in any corner of the room on command.

Unaddressed Issue: Near the end of the film, Holmes reveals that Blackwood killed Standish by spraying him with an “odorless tasteless flammable liquid” that Standish mistook for rain. What would Blackwood have done if Standish turned against him and it wasn’t raining outside? Holmes never suggests a back up plan therefore it’s safe to assume it doesn’t exist since Holmes is the world’s greatest detective and obviously he would’ve found out what it was.