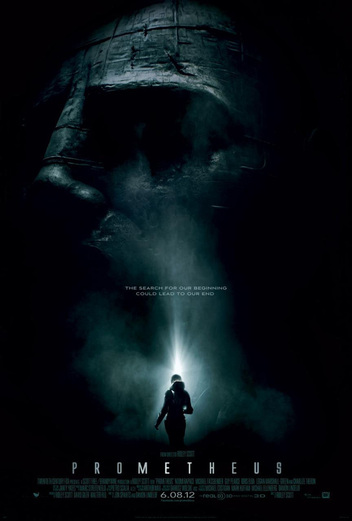 Minor Plot hole: If we have the same DNA as the Engineers who dissolve in water on other Planets to create life, how come all the other animals on Earth do not share the same DNA?

Minor Plot hole: After Fifield and Millburn are killed; the crew is clueless about the status of the two men. If only they could listen to the tapes of their conversations like the ancient NASA scientists did in the sixties for the Apollo missions. But alas, it seems the recording technology does not exist in Prometheus – unless it’s for showing complex full-room holograms of an old-man pretending to be dead, or looking at HD displays of people’s dreams. Yup, does not exist.

Minor Plot hole: The Engineers are shown to wear elephant masks in their own spaceships on a planet they have no difficulty breathing in. We know this movie needs to tie-in with the space-jokey from Alien but this simply does not work. Those spaceships were not in space, they were underground and the air was breathable.

Major Plot hole: God dammit. How can a 2012 movie still feature this old  imbecile cliché of people running away from a falling building in length instead of sideways?  Vickers ran in a straight line for a minute and Shaw only thought about doing something different after hitting her head on the ground. Her new concussion released her from the script’s cartoonish logic and made her realize she could survive by rolling 2 feet sideways.

Major Plot hole: God dammit. How can a 2012 movie still feature this old  imbecile cliché of scared people trying to be cute to unknown terrifying species? In all the scenes of Fifield and Millburn inside the Alien spaceship, we see them scared of everything: especially the decapitated architect and super-especially when Janek mentions that a probe is picking-up life forms. But no worries! The life forms are just two giant alien-vagina-cobras straight out of your nightmares. This is why the pussy of this story, Millburn, goes against his survival instinct and fear of the unknown to try to pet the alien abominations. ‘’It’s okay baby. It’s okay’’ He says.  Great use of a rapist pick-up line to break the ice with an alien species – no way this will backfire.

Major Plot hole: The alien octopus baby is responsible for many plot holes. Let’s go over each one of them:

1-Shaw takes out an alien octopus from her belly. She lets him/her/it/wtf inside the machine and does not try to kill it herself or ask the crew to bring a flamethrower in the surgery room if they have a craving for squid rings with an after-state of placenta.

2-In order for Shaw to access the surgery room and make her own custom caesarian, she had to hit 2 other crew-members on the head with a blunt metal object. Those two crew-members will 2 hours later join Shaw for another mission in the alien cavern and none of them will ever mention that Shaw used to have an alien baby in her stomach, that they were savagely attacked, or that they can’t walk straight anymore since their brains started to leak from their nostrils.

3-Putting aside the previously mentioned problem of Shaw not telling anyone about her hentai-potent child, it is shocking to see no one did anything about it either. It could be said that Weyland maybe wanted to keep it on-board but he is still a dumb-ass if he ordered the crew to keep the squid in the automated surgery machine instead of freezing it and putting in storage like it was intended for Shaw.

4-How did the squid baby get so huge? It was out of its mother’s belly for less than 10 hours in a room with no food and water but still added 1 ton of mass on itself – half of which being dedicated to a sweet new set of vaginas. Did it assimilate all the particles in the air? That should be enough…

Major Plot hole: The alien ship crashes and the engineer pilot has two options: either run for the next alien ship knowing he won’t be stopped this time by an over-joyed suicidal crew or start to hunt for the remaining female human character that presents no threat to him. He chooses the latter. But how did he find her so quickly? Shaw reached the crashed escape-pod in a minute and the Engineer was already right beside her. It would be fair to assume the alien ship has its own life detectors and was thus able to locate the running Shaw without any problems, but then, how come the Engineer did not detect the 1000-pound vagina-squid right beside her? This gives us two new options: either the Engineer could not have known where Shaw was or he was stupid to not know about the dangerous monster right beside her.

Major Plot hole: There is no way for Fifield and Millburn to get lost in the alien cave. They had an entire crew of people inside their spaceship monitoring everything: their dialogue, their positions – you name it. Are we to believe no one on the deck heard them say they wanted to go back on the ship? Are we to believe no one gave them directions to go back to the surface? Are we to believe the Prometheus crew simply assumed they were still with the others even if their scanners and probes would show they were not? Was there any shittier way to write the script to make sure those two guys were stranded inside the cave during the storm? (The answer is NO to all the questions).

Plot contrivance: It made no sense for David to poison Charlie with the goo. He is the most advanced android in existence; spent two years guessing an alien language from snippets of old languages but somehow – skipped all the literature on basic scientific process. If he wanted to test the black goo on humans, he could have tried in a controlled environment in a lab with a sample of human tissue. He did the complete opposite of that. No one knew what the black goo would do. He infected one man with it and let him loose. How could he know Charlie would not transform into a monster in an hour and try to kill him? Or that he would not spray airborne viruses from his lungs and transform everyone in monsters that would have tried to kill him? David  had his own motivations, but he put his existence in jeopardy and the only reason he didn’t die was because of circumstantial luck.

Plot contrivance: The effect of the black goo is all over the place and unpredictable like a diva on PMS.

–          Worms are covered in it: they become giant vagina-cobras with an oral fixation

–          A geologist gets his face in it: becomes a gymnast zombie from Resident Evil

–          A human drinks it: make him impregnate an infertile woman with a giant space squid

It must be great to be a screenwriter who can pull so many different things from his asshole: it’s like your own personal backpack in-between your legs.

Plot contrivance: A crew of 17 people accept to go on the most dangerous mission of their lives and are only briefed on their mission right before landing on moon LV-223 instead of before signing their contracts 2 years prior on Earth.

Plot contrivance: For some reason, one of the most advanced medical equipment known to mankind is programmed only for male anatomy. Maybe this is why only 12 units were built; the company’s medical staff  got fired after they were unable to sell it to any decent hospitals featuring female patients and doctors.

Plot contrivance: Peter Wayland makes no sense. Why tell your crew you are dead? Why plan to go on a mission yourself inside the alien cave that will show to your whole crew that you were alive this whole time? Why bother? Since everyone wasn’t briefed on the real purpose of the mission until they woke-up from their Cryosleep, why would anyone care if you were on-board? Senile much?

Plot contrivance: Meredith Vickers, the leader of the Prometheus crew thinks she is half a billion miles away from Earth – even though that is roughly the distance between the Sun and Jupiter. Maybe you should start using light-years as a distance unit if you are in another solar system lady.

Plot contrivance: The body of the Engineer was only two thousand years old. The DNA of an Engineer identical to the dead one was used to kickstart life on Earth. That’s a gap of about 500 million years of evolution give or take.

Unaddressed Issue: Pretty much everything that is not a plot hole is an unaddressed issue in this movie. Why did the Engineers show a star-map to their weapon facility instead of their home planet? Why were the Engineers running away from a threat to go inside the cargo room instead of another non-dead-end option? What happened to the other alien ships? Did the threat attack all the alien ships at the same time to make it impossible for one of them to escape? Why was there still one living Engineer inside the spaceship? Wouldn’t the threat kill him too? The alien spaceships have been underground for more than 2000 years; did no one back home want to see what happened? Why did Janek not care at all about the 2 scientists trapped inside the alien cave? What is the purpose of those random pixelated flashbacks of the Engineer crew running? Why was everyone so relaxed about finding out the biggest revelation of human history? And why, oh why was there a goddamn flute to activate the alien ship?

Unaddressed Issue: Why do two archaeologists not understand that Mesopotamia is a geographic area with a lot of cultures, including Sumerian and Babylonian. The introduction by Dr. Holloway to the crew states that these cultures were centuries and thousands of miles apart and had no contact, but the Sumerian cities of Ur and Uruk absolutely traded with Babylon. Do your homework fake-archaeologist screenwriter! Because we do here ! We won’t let you get away with ANYTHING!