Pirates of the Caribbean: At World’s End Plot holes 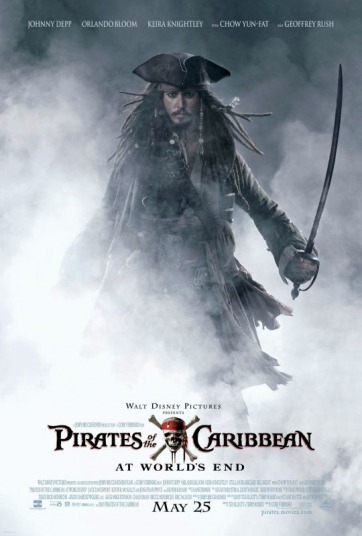 Minor Plot hole: Davy Jones is a cursed man. He can only set foot on land once per ten years. He also mentions that he cannot go back on land for almost a full decade. In a scheme worthy of a Nobel prize of intelligence, Davy Jones can trick his curse by walking on water-filled buckets installed on land. This does not change anything. The buckets are on land, and so is he. The fact that his feet are wet does not negate the pressure he creates on the soil. Minor Plot hole: After being left in the dark for 2 movies, it is revealed to the audience that Jack Sparrow was one of the 7 pirate lords of the World. This means that he had to be at the pirate lords meeting during his 2 years as the captain of the black pearl (before the mutiny organized by Barbossa). However, Barbossa is also a pirate lord. But since both of them had to be present during the meeting, and since all pirate lords are also ship captains……how can both Barbossa and Jack Sparrow be 2 of the original pirate lords  ? Plot contrivance: Lord Beckett, the antagonist of the movie, who controls Davy Jones, decides to ask said Davy Jones to kill his incredibly powerful sea-monster: the Kraken. Since Beckett controlled Jones and since Jones controlled the Kraken; Beckett controlled the Kraken. It would have been a great addition to his army; in fact making it almost unbeatable. But since the thing was simply overpowered and potentially unbeatable by the heroes, the writers decided to erase it. (by the way, how did Davy Jones kill the Kraken anyway ? )Plot contrivance: Before Calypso is released from her human body, she says to Davy Jones that the humans will witness how cruel she can be once free. It is then revealed that cruel meant transforming into a wave of crabs and create a small whirlpool. Ok…..that action sequence in the whirlpool needed to happen somehow, right ?  (p-s: her actions did not kill a single human)Unaddressed Issue: When the heroes come to rescue Jack Sparrow in Davy Jones’ Locker, they encounter Elizabeth’s dad who is now dead (killed by the East India Company). Since Tia Dalma brought back Captain Barbossa from the dead (never explained how) and since they were also going to bring back Captain Jack……what stopped them from bringing Elizabeth’s  father on the ship ?Unaddressed Issue: In the same scene, Tia Dalma mentions that it is important for them to never  go in the water because they might join the dead. But at the end of the act, they have to flip the ship upside-down, everyone  gets into the water, and nothing happens to them.