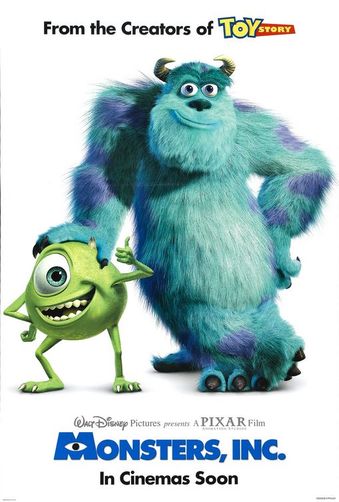 Minor Plot hole: It is apparently a terrible crime to expose the monster world to humans. But when monsters commit such crimes, they are banished to the human world. Which exposes the monster world. Ingenious.

Minor Plot hole: Being banished from the monster world means absolutely nothing when you can easily return to it via the closet doors in children’s bedrooms. It’s like if you were exiled from a country with a free first class ticket to come back.

Minor Plot hole: Monsters, Inc is struggling because children are harder to scare in modern society and do not bow to the intimidation of the monsters. This just makes no sense – if a giant blue hairy lizard-mammal monster hybrid leapt into my room, I’d shit my pants. If a little round eyeball with arms and legs entered my room, I’d shit my pants. Any human being would because that shit is unnatural and absolutely terrifying. There is no way a child would not react to that unless it’s the offspring of Kristen Stewart.

Minor Plot hole: The ending sees Monsters, Inc reforming itself to a factory that fuels the city through making children laugh as it generates ten times as much energy as scream did. This is all happy and lovely, but still – how are children laughing at these monsters? As I said before: if a giant blue hairy lizard-mammal monster hybrid leapt into my room, I’d shit my pants. It doesn’t matter if they’re there to do stand-up or not, I would not be fucking giggling. I’d be soiling my undies and leaving the room without hesitation as I’m sure any freaking six year old would.

Major Plot hole: It is established that doors are created to enter a child’s bedroom via the closet and reentering that closet while the door in the monster world is online will return you to that world. However, during the climactic chase scene of the film, the screenwriters took a big monster dump all over this logic and made it so doors could be accessed without being online – meaning all humans could potentially reach the monster world at any time – even though it never happened. Try and make sense of it because I give up.

Major Plot Hole: Randall plots to have Mike return Boo to her room where he can kidnap her for his diabolical scheme. However, while executing said plan, Randall, established as a sly and intelligent person who puts great thought and subtlety into his plans, throws common sense out the window in several ways. 1. He doesn’t look at the figure he stuffs in the box. 2. He doesn’t wait for Mike to leave thus eliminating the only potential witness to his villainy. 3. He doesn’t look to see if Mike left. Being invisible, he could have done so without Mike even knowing. 4. After he kidnaps Mike by mistake, he is startled to hear a noise suggesting someone is around despite the fact that someone, i.e. Mike, would have dropped Boo off as Randall told Mike to do.

Plot contrivance: A huge hunt ensues for Boo when she appears the monster restaurant. The CDA sends out soldiers, tanks and helicopters to capture the child – only after they zap the shit out of the restaurant with a human killing force-field of death.

Yet when seriously concerning electrical problems occur ONLY in Sully and Mike’s apartment, they observe it briefly and then just ignore it. They don’t even bother to go and investigate a potential lead, instead preferring to point giant spotlights over empty city streets. All this crazy shit to capture a child and yet common sense is completely absent.

Plot contrivance: Sully exits a random door that is conveniently next to a track of moving ones that leads to Randall. Seeing as Pixar confirmed that the large vault houses around 5.7 million doors, the odds of this are absurdly low.

Plot contrivance: The Abominable Snowman tells Sully the village is a three day hike from where they are on the mountain. Three days of hiking does not become thirty seconds just because you are on a sled.

Unaddressed Issue: Doors are constructed in the monster world to enter the human world. They are connected to the other world via a closet door in a child’s room, so monsters only need to construct one side of the portal. So with that said, who the fuck built the door in the snowy mountain where Mike and Sully are banished?

Unaddressed Issue: Why do monsters believe children are toxic when contact from Boo does no harm to Sully whatsoever? The plot point is only relevant when the script needs some comedy and is consequently abandoned. It is never ever explained why the monsters have such a lifelong fear of children touching them – surely some must’ve been touched before? If they are huge monsters, why was the concept of children being toxic introduced to them? Why do they need to fear innocent kids that they scare? My brain is melting in a struggle to figure this out.

Unaddressed Issue: Was it always Mike and Sully’s plan to lure Waternoose into the simulator and expose his true villainy? If so, how was it organized so fast? Mike and Sully only realized Waternoose was bringing Boo’s door and them back to the CDA around fifteen seconds before the plan begins. It is ridiculous to assume that such a crafty plan was deduced and explained in that amount of time.

But say I’m wrong. Say they just planned to split up so Sully could return Boo home, and then improvised when Sully accidentally caught Waternoose’s attention. It still makes no measure of sense because Sully returning Boo to her door will do absolutely nothing as Waternoose can still get her back from it. And Mike managing to get to the simulator, convince the pursuing CDA officers not to stockpile on him and conveniently make it in time to film Waternoose being a douchebag is just stupidly reliant on lucky coincidence.

Unaddressed Issue: Surely the monster world is now exposed if Sully broke into multiple houses in a small village and tried to enter their closets to return home? It’s never ever addressed, even by Sully himself.