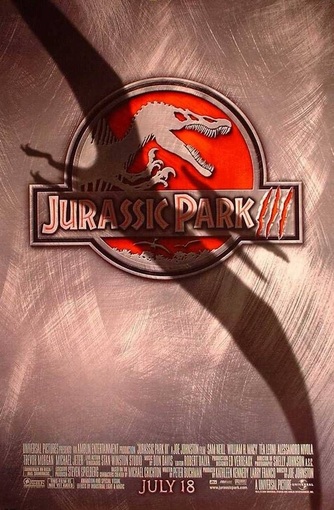 Minor Plot hole: A man is sent onto the beach to call for Alan Grant before the army and the navy even reveal themselves. Question is – why? What use did this serve? Yes it makes for a cute reveal for the survivors but it also puts everyone in danger. You would think the US navy would be more focused on efficiency than making a surprise party on the beach.Major Plot hole: When a man approaches you claiming to be the CEO of a massive business cooperation that you’ve never heard of and asks you to do something very dangerous for a large sum of money, would you expect payment upfront and do a huge amount of research before believing him? Grant apparently didn’t. He thought waiting until after the ordeal to cash in the fake cheque and not even Google Kirby Enterprises to check its authenticity was a fantastic idea. I mean seriously, a 30 second search on the Internet and you would have seen it didn’t exist !Plot contrivance: Apparently shitty old satellite phones can be eaten by a dinosaur, with its massive jaw and then swallowed and still get a signal. Not only that, but you can also hear the ring tone from inside its massive belly when it’s standing half a mile away. And finally, the phone can easily be found in the dinosaurs disgusting excrement and STILL WORK. But it’s not a plot hole – those phones exists: it must be a Nokia.Plot contrivance: The Spinosaurus can ram into a giant steel fence lined with barbed wire and huge metal spikes and destroy it with ease. However, a small rusty old door held shut by just a few locks is impossible to open, and destroying the small building around it is also impractical. Make a decision Spielberg ! Is your monster strong or not ? You can’t have both !Plot contrivance: Ellie somehow managed to convince the army and navy that Alan Grant and a bunch of other nobodies are trapped on Isla Sorna having willingly went there themselves illegally and then manages to convince them that they are worth saving, so much so that they should send hundreds of tanks, boats and helicopters. At this point, I was surprised the President wasn’t there waiting to shake their hands on the beach outside of Air Force One.Plot contrivance: Upon landing on the island, Amanda Kirby grabs a MEGAPHONE and yells her son’s name. Landing on an island full of dinosaurs and drawing that much attention to yourself isn’t really a good idea. The characters eventually acknowledge this, but how fucking stupid can you possibly be to do it in the first place?Plot contrivance: The Kirby’s did their research on Alan Grant and knew he was the most ideal candidate for the job. They just missed one minor detail – he was on the other island throughout his whole terrifying dinosaur experiences. I guess that’s an easy mistake – after all, Alan Grant didn’t exactly publish books on his horrifying ordeals, right?Unaddressed Issue: Why is nobody at all concerned that three Pterosaurs who moments ago brutally tried to murder Billy and feed Eric to their babies are flying into the distance toward other countries where they could potentially breed some more and cause havoc? No time for that right? John Williams’ score is so relaxing.