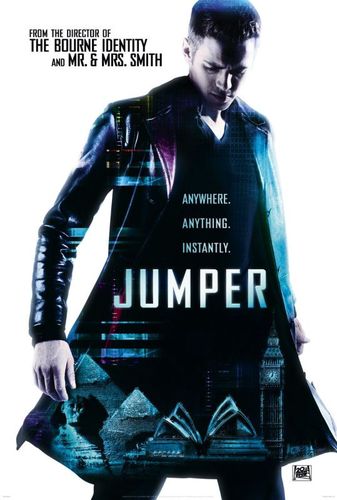 Minor Plot hole: When David is left to die under the frozen river, no one at school nor the police contact his father to tell them that his son is missing and likely dead. Instead, David comes back at night after his teleportation experience and his father is watching T.V; angry that he did not arrive on time for dinner.Major Plot hole: In the movie, only the paladins and the jumpers are aware that teleportation (jumping) is humanly possible. This is interesting considering the fact that the main protagonist once jumps to hit on a girl in a bar while everyone is watching, or that Griffin is driving a car around Tokyo one day and teleports the car all over the road, or that, at the end of the movie, Griffin teleports a loaded bus out of the road into the desert to crash……and this does not include all the cameras in banks and shops that would have spotted them steal their stuff.Major Plot hole: Paladins have been successfully hunting and killing jumpers for centuries. In the 2000 era, they can barely catch them by using special electric wired gun technology that discharge important amounts of electricity in order to temporarily remove their capacity to jump. SO…….how where paladins catching jumpers during the middle ages ? Or any other periods without guns and planes ?Plot contrivance: Paladins use electrical weapons that discharge enough electricity to stop jumpers from escaping but not enough electricity to kill them.Plot contrivance: David Ryce teleports one night in a small bar in London….and another jumper like him also happens to teleport in the same bar at the same time. What is also interesting to note is that both jumpers do not live in the same time zones. Which means that David wanted to go pick-up a girl in the afternoon; otherwise both of them could never meet in a bar. Plot contrivance: When David and Griffin are falling off the Empire State Building in order to catch a bomb detonator, they both teleport in a small private pool in order to break their fall. But since they had been falling for literally 15 seconds, they should have exploded on impact.