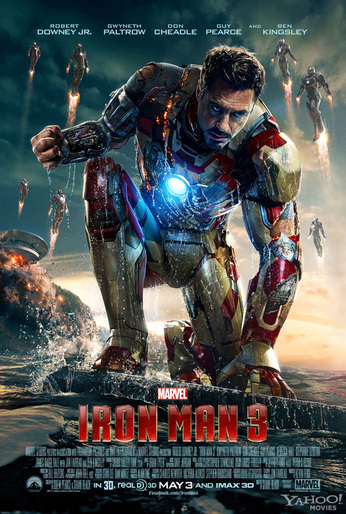 Minor Plot hole: Killian’s memorable henchman: bald no-name, pretends to be Rhodes by flying inside the Iron Patriot suit to join the President in Air force One. Here, we are presented with a comically bad non-exchange conversation where the President salutes Iron Patriot, his employee, and then proceeds to welcome him aboard even if he didn’t reply back with anything. Wouldn’t the President of the United States who was threatened by a deadly terrorist still at large have better security measures than simply accepting a man in a suit without any sort of confirmation that it is indeed Rhodes? The guy didn’t say anything, didn’t present any identification. Aren’t there people protecting the president with outrageous salaries to check for things like this? Not in this movie apparently!

Minor Plot hole: Why would Pepper go at the edge of her house WHILE it is collapsing? We see Iron Man falling with debris in the water – as more shit continues to fall from the house itself and Pepper thinks it’s a good idea to search for her man. What was your plan Pepper? Every step your were taking was getting you closer to death. It’s a script-miracle you didn’t die !

Minor Plot hole: We are not done with that scene. So congrats – you didn’t die at the edge of your house even though every other wide-shot of the house showed the hedge was still collapsing in the water. Whatever. So you stayed there for a few seconds searching for your man. And you got really sad when you assumed he was maybe dead because he never came back from the ocean. Oh wait. He actually did. Tony Stark left his deadly Bioshockesque predicament after a mere 30 seconds. He was rocket-proppelled out of the water in a loud way and at this point we have to ask ourselves….how did Pepper not see Iron Man? She was at the hedge of the house – looking at the water – and Tony came out of the sea a few seconds later. What the hell Pepper !

Minor Plot hole: We are not done with that scene. Again. Iron Man is stuck under many debris after the collapse of his house. Jarvis then takes control of one of the gloves – detaches itself from the armor – grabs Tony’s naked hand and pulls him out. Except that it doesn’t work. The debris were so heavy that Iron Man couldn’t move them. Jarvis-piloted glove would have ripped the whole hand off. Jarvis, are you aware of Newton’s third law of motion? Rhetorical question bitch! I know you are not. Take that super-intelligent robot! Why didn’t you simply use that glove to pull Tony with his other arm? The one still completely covered by his metal suit? Anyway – you are done Jarvis. Computer: 0. Naked overweight blogger: 1.

Minor Plot hole: Surprise! We are not done with that scene. So when Tony is unconsciously flying in the air to land in Tennessee after getting out of the underwater debris, how did the U.S military not spot him? He was in the air – with propelled rockets for quite some time. How come not a single U.S top-of-the-line radar and satellite spot him?

Minor Plot hole: During the final showdown at the harbor, one Iron Man robot targets the freshly ”Extremisized” Pepper Pots and targets her. Tony tries to tell Jarvis not to attack her but his earphone has fallen out. Pepper defeats just about everyone and then they hug. Noticeably tony still isn’t wearing the earpiece but he taps his ear and can suddenly speak to Jarvis for some impeccable reason.

Major Plot hole: Putting aside the retardedness of saying on television your address for the whole world and terrorists to know, there is also the retardedness of not getting ready for it. Tony – you just challenged the Mandarin, with a slick record of dirty bombing tactics, to attack you at your house. Ok great. What was your plan exactly? Aren’t you a billionaire with tons of technology? Why wasn’t there a radar to spot all those helicopters in advance? Why didn’t you have anti-missile defense around your house? Or perhaps you never had any of those – which would make sense, but then why push the number 1 terrorist in the world to attack you. Obviously he was going to bomb the shit out of you. You took absolutely zero precaution. But unlike me who can use this excuse while I’m drunk with a hooker – you’re supposed to be one of the smartest man on the planet with an unlimited budget. Think for god’s sake!

Major Plot hole: Tony created dozens of other remotely-controlled and destructive Iron Man suits in order to protect himself from future threats. However, the word ”threats” here does not include the complete destruction of his house and the manhunt on him in Tennessee. In fact, when he decides to visit the Mandarin’s mansion he sieges it with Wall-Mart shit instead of using his arsenal of billion dollar robots. Yeah I know, Jarvis mentions earlier that his secret hatch room containing his whole army is buried under the destroyed house. Alas! If only those robots had any kind of firepower to blow that shit-up like Iron Man himself did in the first movie with his now obsolete first suit. Oh, they all did? Tony had 30 mega-robots in a room and not him or his super computer thought that they could have escaped from it by blowing the roof off? And as we saw, Tony’s house is big but there are not that many floors like a castle – barely anything was keeping those robots there: aside from the script masturbating its way to the finale.

Major Plot hole: Where the fuck was SHIELD and the other Avengers? Nothing like an international terrorist blowing things-up in the U.S and threatening the President to catch the attention right? It was mostly an American problem so where were Nick Fury or that American Avenger who has the word ”America” in his name? The problem with creating a franchise like the Avengers is that you will pretty much never have a good excuse to exclude all the others characters when a big villain shows-up to destroy shit. Halfway through the movie, the World think the Mandarin has killed Tony Stark. Well, flying alien whale-vaginas didn’t kill Iron Man last time. But now a bad guy supposedly did. Are you sure you don’t want to interfere Avengers? What about you SHIELD? I’m sure most of your funds comes from the United States military budget, are you going to do anything? No – ok.

Plot contrivance: Tony throws a purple grenade at one of Mandarin’s mansion guard and his initial reaction, instead of running the fuck away, is to curiously approach the grenade and take it in his hand like a young kid discovering a used condom on the street for the first time. Dude! I know its not green but it is clearly shaped like a grenade and you are protecting the number 1 terrorist in the world: it’s a grenade! Jump away ! No need to sniff it.

Plot contrivance: So Tony Stark is believed to be dead and 1 day later he is roaming Tennessee with a super costume called ”a cap” in the spy inner-culture and no one recognizes him aside from that goofy and useless TV editor character who wants to be inside of him. Seriously, he is Iron Man. Everyone knows him: he saved the World from Aliens a few months ago. He is a living god for the people and no one realizes it’s him.

Plot contrivance: Instead of giving Rhodes one fight scene in the movie, he has this weird moment where a girl touches his super-robot suit and the heat instantly shuts him down. Why? Aren’t these suits supposed to be able to withstand great physical traumas and temperatures? I could understand if it started to melt his robot hand off by why was it shutting his suit down?

Plot contrivance: The Iron Man suit are built like dollar-store clothes: One size fits all. Regardless if you are a billionaire in shape, a hot blonde in heels, a bald no-name warrior or an old President: the Iron Man suits will still fit you like a glove.

Unaddressed Issue: What was that Pepper Pots? One second you think you are dying, the next you are punching an Iron Man suit in the air to pull its battery out to toss it at the villain. I understand that the extremis virus makes you stronger – but when did you learn to backflip-stab flying robots? As far as we know, you had trouble running in high-heels for the last 2 movies. Where you hiding that talent from us or was the extremis virus also modifying your brain to become a sexy ninja?

Unaddressed Issue: Why kill the President in the Iron Patriot suit? Is it because it represents America? Isn’t it a big risk to take? Your prisoner his inside one of the deadliest metal suits of all time. How can you be sure he won’t eventually just rip the metal chains off? Speaking of which – why in hell did the President need to be saved by Rhodes if he could just destroy the chains himself?

Unaddressed Issue: How could Tony Stark get that operation to remove the shards from his heart without dying? The last two movies were pretty adamant about the fact that any operation there would kill him. Why is it different now? Did he inject himself with the extremis virus concocted by the man who brewed a 14-year vendetta to kill him and have sex with his wife? Did he just decide to take a risk because his last week wasn’t stressful enough?

Unaddressed Issue: What is Aldrich Killian’s motivation as a villain. Yeah sure – he wants to control the World with nuclear suicide bombers – but haven’t we all wished for this? Anyway. That’s not the issue. The problem here is that Aldrich used to be a cartoony nerd in 1999 who got rejected by his nerdboner Tony Stark. We then skip ahead to 2013 and Aldrich is still super-angry at Tony….and wants to control the World. Ok. Why? If every guy on the planet who got rejected in 1999 wanted to control the World at all cost with violence – there would be no man left. What kind of shitty villain is this?