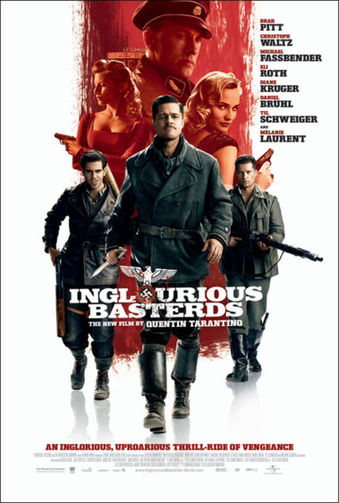 Minor Plothole: Hans Landa, the Jew Hunter, finds the Jews hiding underneath Mr. Lapadite’s floor and orders his men to kill them.  Shosanna Dreyfus escapes  even though Landa could have shot her. Since his reputation precedes him, it is not logical for him to let a Jew escape while his soldiers are there watching him doing nothing.Major Plothole: Hugo Stiglitz is a famous German Nazi-Killer. However, the Basterds thought it would be a good idea to bring him as one of  Bridget von Hammersmark’s male guests to the Nazi Premiere of a propaganda film. He would have been recognized by everyone. However, this does not happen because he is killed in a french Bar/Basement. This is nonetheless stupid because Stiglitz’s role was to pose as a German soldier…which is worst then a British faking a German accent because the guy is a famous Nazi-killer. The Basterds were asking for a Mexican standoff.Major Plothole: There is a big Nazi premiere in a French Cinema. All the important Nazi leaders and elites are present, including Hitler and Goebbels. Since France is so far however, they forgot to bring their soldiers to protect them. Apart from the two guards in front of Hitler’s balcony, there was no German soldier at ANY OTHER door during the movie. Which means that even a kid could have trapped the German audience inside the Cinema since no one was watching the doors. This is very unlikely for a military regime having an important event in another country.