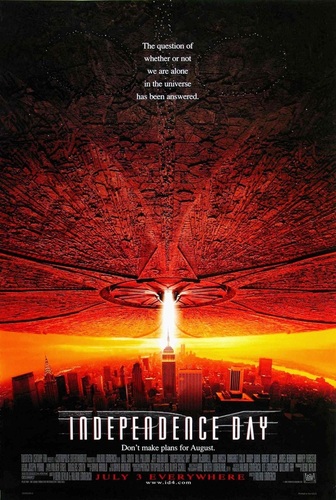 Minor Plot hole: The entrance to Area 51 is simply a shack with two guards working it. That seems like more than enough security for the most advanced military base in the world. 1 shack for 30 miles of perimeter, nobody is going to make it past that. What did they think they were going to accomplish when they stopped one truck while hundreds continued to drive past them ? Drinking much ?

Minor Plot hole: Will Smith convinces an alien space ship to follow him into a canyon chase scene, why not use that advanced brain of his and simply follow the fighter jet from above and shoot him in the face or wait for him to exit the canyon ? Because canyon chase scenes are awesome !

Minor Plot hole: Will Smith is able to knock out an alien wearing a protective space suit for hours on end. With a punch like that, why he did not seek a career in boxing is beyond me.

Minor Plot hole: Kind of odd that doctors with years of previous knowledge of the anatomy of the aliens did not think to sedate the alien they were cutting apart. Perhaps they noticed Will Smith’s fist print in the side of its head and just assumed that no one could survive that, unless it was God.

Minor Plot hole: Will Smith is able to fly an alien space craft simply because he has seen them flying before… wait…what?

Major Plot hole: A human computer virus….downloaded on an alien computer. Nothing else to add here. One of the most famous plot holes of all times.

Major Plot hole: To destroy the remaining ships that are all over Earth, one must simply have an object meters away from the tip of their primary weapon when it is fired. This will make the growing explosion to spread throughout the space ship instead of the ground. With this simple strategy, the Americans were able to contact countries all over the world telling them how to destroy the aliens. Congo must have had a pretty easy time with this, all they had to do was hurl a spear a mile into the air and get it right at the point the second the weapon is fired, whats so physically impossible about that?

Plot contrivance: Will Smith, a U.S. Fighter pilot who must have at least 20/20 vision with excellent peripherals, makes it all the way to the edge of his driveway, and somehow doesn’t notice the city sized space craft blocking out the sun from his house that seems to be built on a cliff side.

Plot contrivance: During an alien invasion, after being told to evacuate the city, people in gridlock traffic trying to leave D.C. are unable to comprehend the ability of their cars to travel in the wrong direction on the highway.