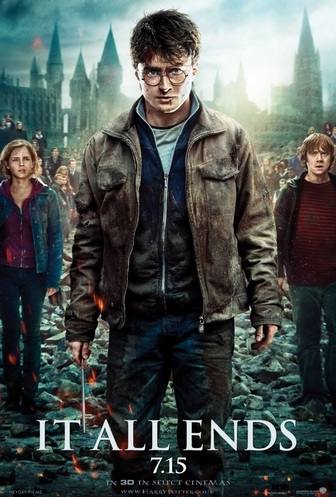 Minor Plot hole: The 3 Deathly Hallows make its bearer the master of Death. But this is not true. Part 1 revealed that the younger brother of the legend who only had the cloak of invisibility was able to flee Death up to the point where he was just bored with life and ready to go. So the bearer only needs the cloak of invisibility to be master of Death – the other two deathly hallows are simply bonus additions. Major Plot hole: It is revealed that the Elder Wand makes its master unbeatable in a duel. Yet, Dumbledore, who was by himself an over-powered Wizard, with the Elder Wand, was never able to beat Voldemort. Does that mean Dumbledore was a retard for failing to kill Voldemort in the 5th movie ? Or does that mean the Elder Wand is the only deathly hallow to not follow the rules of the legend ? Choose your side ! Plot contrivance: When a Slytherin asks the whole school to rat on Harry Potter, McGonagall sees fit to scream ‘ All slytherins to the dungeon ! ‘. You know, because all 10 year old girls and boys in Slytherin are future psychopath and deserve to be punished for crimes they may or may not do. Like PreCrime in that Steven Spielberg movie. Guilty until proven innocent ! Unaddressed Issue: If Voldemort was so close to succeed in his plan to dominate the World, why didn’t the Wizards ask for help from the Muggles. It could be argued that a few thousand soldiers with automatic weapons, a dozen fighter jets with heat-guided missiles, drone snipers and just a good ol’ Nuke would have helped the good Wizards if not entirely stopped the War. But I guess magic can stop all of that right ?