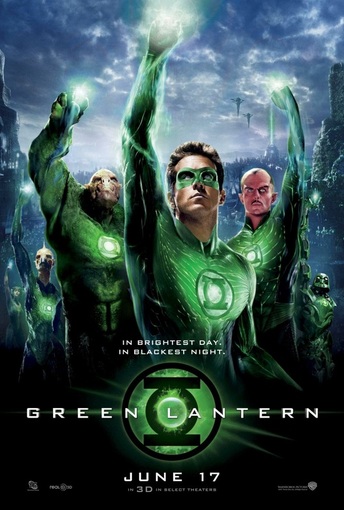 Minor Plot hole: Abin Sur crash-landed on Earth. So obviously, NASA caught his arrival minutes in advance and the U.S Air Force was already on its way the moment he crashed. No sorry, that would be how it would happen in reality. You see, Green Lantern’s universe is similar to ours, the only difference is that police and military forces on Earth are absent unless it involves testing drone fighter planes. This is why the military decided to not attack the Parallax later in the film, because it wasn’t part of a war flight simulation in the desert.

Major Plot hole: Mid-way through the film, Hal Jordan decides to quit the Green Lanterns for good……..but they let him keep the ring that makes him a Green Lantern. Oops.

Major Plot hole: The Parallax, the most evil force in the universe, could be killed by 1 Green Lantern. Did no one ever consider attacking him 3600 vs 1 ? Did all Green Lanterns fail to realize he could get killed by being pushed into a star ? Was it their plan to let the Parallax get stronger by feeding on more and more planets without doing anything ? Were The Guardians of the Universe smoking weed all this time ? So many questions, and so much cgi.

Major Plot hole: Twice in the film, Hal Jordan randomly knows that Hector Hammond is about to commit some evil deeds in an autopsy room and later in a factory, even though he had no prior knowledge of the location, situation and people involved. Even if someone could argue that Green Lanterns know when danger is about to occur, there are millions of dangerous situations on Earth at any moment. How did he end-up there? It might have been a good idea to hire an editor for this movie……..or a screenwriter.

Plot contrivance: Hal is able to fearlessly go up with his plane above 50,000 feet and missile lock the enemy drone planes in the simulation without breaking a sweat. Then, for no reason, Hal succumbs to fear even though his mission is over  and that the only thing left for him to do to be safe was to steer the plane back in a horizontal position. Why was he scared at that moment ? Because  his flashback with his father had to be shoehorned-in.

Plot contrivance: Sinestro asks the Guardians to forge him a yellow ring of fear so that he can fight The Parallax. When the ring is crafted and  Hal asks for help to defend his planet against the Parallax, Sinestro decides to not fight………or any of the other 3598 Green Lanterns for that matter. It nevertheless does not stop some of them to save Hal right after he killed the Parallax. Now that’s convenient.

Plot contrivance: 3 aliens in space who landed on a big asteroid fall like bricks through a dirt surface and into the Parallax’s cave even if there seemed to be little to no gravity a few seconds earlier.

Unaddressed Issue: If the Parallax can be killed by the sun, why didn’t Abin Sur and all the other Green lanterns simply pushed him or his prison/asteroid  into a star ? That seems a lot more simple. Aren’t they supposed to be geniuses?

Unaddressed Issue: The only limit to a Green Lantern’s power is said to be his imagination. But this is not true. Because any Green Lantern could simply imagine a world with no evil forces and all villains would simply die. Since they can’t, imagination is not their power’s ceiling. So what is it? The screenplay? The tie-in toy merchandise? The cgi budget?