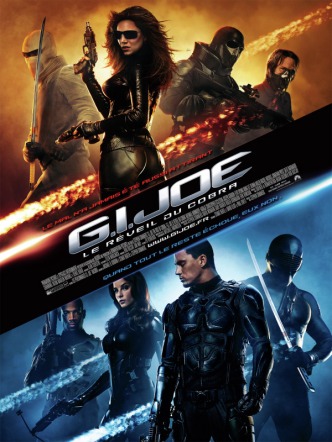 Minor Plot hole: In G.I. Joe, ice does not float: it sinks at the bottom of the ocean along with scientists’ screams. Unless it doesn’t; like the North Pole.

Minor Plot hole: After Ripcord shoots down the first nanomite missile over Russia, he has about 15 minutes to reach the second missile going over Washington. Which means he had to go at over 25 times the speed of sound to reach the missile before impact. His jet engine’s was fueled by scientists’ screams.

Minor Plot hole: When Ripcord crashes his jet into the second missile, the nanomites start eating its metal components. But when he ejects himself with his metal suit from the cockpit the nanomites are not hungry anymore.

Minor Plot hole: When Cobra attacked the G.I Joe headquarters at night with an impressive army of 3 people, the hundreds of Joes that were shown during the day were not present…leaving about 5-6 individuals to guard the most important military base in the United States. Good job.

Major Plot hole: Duke felt responsible for the death of his fiancee’s brother and thus never attended his funeral… or talked to his fiancee ever again. A true lovable protagonist.

Major Plot hole: The Baroness has been working for 4 years with Cobra commander and she never suspected or recognized that he was her lost brother. But his villain suit was successfully hiding his chin so he was kind of undercover.