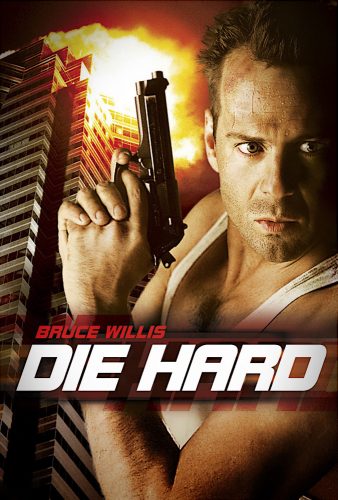 Major plot hole: What terrorists plan to do is to make FBI agents treat the takeover of the Nakatomi Building as a hostage crisis and switch off the power so that the group of villains would open the vault and perform the robbery. It’s clear that the terrorists know the building’s plan well and have access to explosives. Why then didn’t they cut off the power to the building, or the entire zone, themselves? That would ease the crime so much!

Major plot hole: Theo, the hacker and safe burglar who works with the terrorists, said that drilling of the safe made the electromagnetic lock drop”. As far as an electromagnet is just a magnet that’s activated by electric current, why they didn’t interrupt with electrical power supplied to the vault to avoid such situation? As it has been mentioned above, they could have simply cut the power, which would allow them to drill the safe without problems and steal its contents easily. All of that could have been performed when the group was going on upstairs, and the only way anybody might have figured out what was happening was the very moment when the power went out suddenly.

Major plot hole: John McClane appeared to be against terrorists – they didn’t realize it until the very moment when he killed one man from their group and sent him down in the lift with a note attached to the corpse. However, if by doing so he wanted to protect his spouse and the other people, his actions seem to be illogical.

Just think of it: if he had simply murdered that guy, taken the detonators and hidden, he would have prevented villains from performing almost all steps of their plan. But he barely manages to survive the meeting with them and potentially threatens the safety of other hostages, as well. At the same time, if he wanted to avoid such outcomes, he should have thought that his actions would eventually lead to such conclusion (that was clear).

Minor plot hole: Although terrorists know the plan of the building well, they should be aware of the emergency stair. However, they never use them. While it would have taken them a couple of minutes to descend, for some reasons, McClane doesn’t walk down to the basement parking garage this way.

It would be the smartest method of escape: Argyle would be down there with an active cell phone, as well as exits from the building, which would allow for both McClane to run away, and SWAT or police officers to enter the building easily. But scenarists fully ignored this fact, even though it was shown how Argyle was talking to both McClane and his girlfriend on the phone, which indicated the signal was received normally.

Minor plot hole: Even though the actions in the film took place in 1988, cell phones were already available back then. Why didn’t anybody attempt to call out? Why didn’t John McClane look for any while walking free in the building?

Minor plot hole: Even though it was Christmas Eve, why weren’t there any cleaning personnel, or guards working? They would have been noticed and dispatched by the terrorists.

Minor plot hole: The Nakatomi Tower was 32 stores high, which means there are hundreds of cubicles and offices in the building. Why John McClane didn’t try to enter some offices and hid from the villains while trying to contact the police? It would take terrorists hours to comb through the entire tower and find him. Until he revealed himself, probably, no one would know he was there.

Unaddressed Issue: Evidently, there was an insider who helped terrorists to do all the job. Otherwise, how would they have known so much about the building? They were aware of the tower layout, the number of people present at the party, and knew the construction and contents of the vault. None of that would be possible without a person providing this information. Besides, the insider would make sure that everything was going according to the plan. Therefore, the entire scenario seems to be impossible.

This insider could have been Ellis (McClane’s co-worker), but terrorists kill him before obtaining any valuable information. The same applies to Mr. Takagi, the boss – he was also murdered without purpose.

Who was the insider, and why this person wasn’t uncovered at the end of the movie?