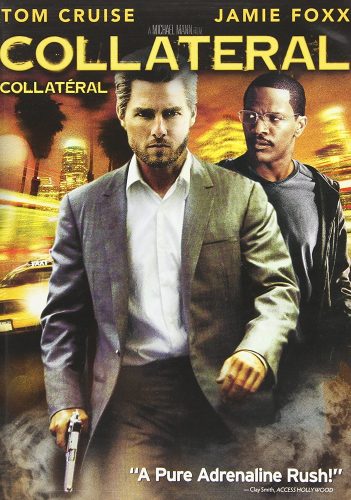 Major Plot Hole: Vincent is shown as a professional killer who was sent to LA to murder 5 people. There, he worked with Max, a cab driver who drove him around the city to do the tasks. When Max revealed what Vincent did, he stopped him at the end of the film. It was a big mistake to have someone else in the car while doing such a dangerous business. Instead, Vincent should have rented or stolen a car to go through LA – the fewer witnesses, the better.

Major Plot Hole: When Vincent enters the nightclub, he lets Max go inside, and he’s almost taken away by an FBI agent. That’s another stupid mistake of Vincent.

Major Plot Hole: But this is not the end! Vincent does another thing that makes no sense. When he enters the building where his last victim Annie is, he cuts put the power without any reason. As the result, he blinds his way through the building and cannot find her, and she is scared so much that she simply runs off.

Major Plot Hole: Just when you think the scenario can’t get even worse, another strange thing happens. When he finally finds Annie, his last victim, Max comes to save her, and Vincent spends several seconds insulting him instead of killing right away. What do you think can happen during these 10 seconds? Right, Vincent gets shot in the face by the taxi driver he hired to accomplish his mission. In spite of everything, he even manages to survive.

Minor Plot Hole: How come that Vincent, a professional assassin, gets defeated on the train station by Max, a usual taxi driver that was hired to drive him in LA. Nonsense!

Minor Plot Hole: When Max decides to warn Vincent’s last victim and tell her to hide and protect herself, he decides to get a phone in the hilarious way. He simply steals it from a stranger on the street who doesn’t even act like “Hey, it’s mine! Give it back!” The main moral in this case is never steal cellphones from random people because even if they don’t chase and punish you, the battery can be simply dead.

Unaddressed Issue: When Vincent murders his first victim, guy’s body falls out from the window and eventually lands on Max’s car. The driver knows immediately who he works with, but only stops him in the end of the film.

Unaddressed Issue: Turns out, Vincent is not the only character to go nuts. When the taxi gets splashed with blood all over the hood by victim’s corpse, the police pull over to investigate (why didn’t Vincent care to wash it?). The film must have ended here, but – surprise – cops are called to investigate another case. Blood on a car? Not a big deal, it can wait!