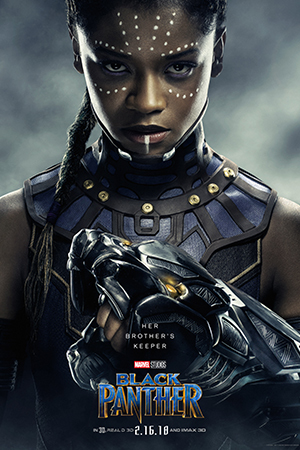 The main plot hole of the film is the fact that movie creators didn’t answer viewers how Wakanda has been staying undetected by satellites, tourists and the rest of the world for so long? How could they hide considering all that we saw in the move: Tony Stark with his technologies, S.H.I.E.L.D and the characters with vibranium. Besides, the items made of vibranium were present in many museums of the world.

Major Plot Hole: Both creators and film characters describe Wakanda as the country that possesses super-technologies. Thus, someone must have created these technologies. Does vibranium make people stronger?

How come that Wakanda population suddenly got smarter and managed to create such technologies without attracting anyone from the outer world? Where are these scientists and inventors, if we see only aboriginal inhabitants of different tribes who’re far from technological advances?

Judging by the film, the only experienced scientist in the country is T’Challas’ sister.

Major Plot Hole: The claim that Wakanda is a super-intelligent country with a high level of development (including intellectual) is illogical. It was said that it doesn’t mess with the conflicts between other countries and preserves status quo.

But what we see is wild fist-fighting, spears used and internal squabbles between villages. What about sword fighting for the throne? Well, the level of development in Wakanda is evidently far from what was claimed.

Major Plot Hole: Some scenes were hilarious: we see the fights between Wakanda peoples dressed in straw national clothes, having their faces painted, using spears, and in the next second, spaceships with laser and plasma guns are shooting. How were these spaceships and militant rhinos combined together. Even if the rest of the world considered Wakanda as a Third World country, why would they have all these battles inside the country?

Minor Plot Hole: Wakanda is a well-developed country, but there’s no education system. All kids from the royal family studies in American universities.

Minor Plot Hole: During the entire film we cannot see any parallels with the rest of Marvel universe. We can’t see that there are Captain America and other characters present. Seems like Wakanda exists by its own.

Minor Plot Hole: The film doesn’t explain what kind of power T’Challa gets from the extract of flowers shining because of vibranium. It’s never explained why a person drinking it becomes the black panther.

Minor Plot Hole: Every time T’Challa wants to say something while being dressed in Black Panther’s outfit, he puts his mask off. It would be logical for the villains (and the other characters) to understand that he’s vulnerable during such moments. His face isn’t protected by vibranium costume, and a simple gunshot would kill him. However, the villains wait while he finishes talking.

Minor Plot Hole: Okay, we understand that Black Panther’s costume accumulates kinetic energy and emits it. But how come it collects the force of gravity without killing the person wearing it? Again, film makers explained neither vibranium’s features, nor costume’s peculiarities, and how it all works.