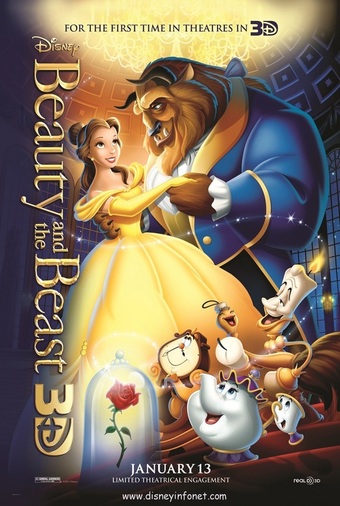 Minor Plot hole: Part of the premise of the movie is to accept the magic of the Enchantress’ curse and what it did to the castle…..but nothing was said about the magic of seasons in France. You see, the introduction of Belle in the French village is during the beginning of autumn. All trees are either green or red and not a single leaf looks like it is going to land on a cold frozen soil. And yet, when Maurice returns to the French village – a mere 3 days after he left, the village is covered deep in 3 feet of snow. WTF Disney?

Maurice’s trip to the science fair was suppose to last 1 day. He was lost at night in the forest, halfway through his destination, and ran away from wolves to find Beast’s castle by accident. Since the horse ran back to the village, and Belle immediately left for the Castle when he reached her, it cannot be more than 3 days until the Apocalypse Winter fell out of nowhere to gruesomely kill most of the cute animals that didn’t have the proper amount of time to prepare themselves and their families from their incoming frosty judgement day.

Major Plot hole: The first scene of the movie introduces us to the villain of this story: the Enchantress – who placed a curse on a selfish 11-year-old boy and all his innocent servants as a bonus. Yes, Beast was eleven years old at the time. The Enchantress said that the flower would bloom until the prince’s 21th birthday and later Lumière mentions that it’s been 10 years since the curse. For all of you at home who have siblings has parents, just read this: 21-10= 11. There you go.

The problem is that Beast has a great painting of his adult self in his room in the West Wing that he quickly destroys with his new awesome paws. But he was only an eleven year old prince, with no parents, alone in a castle with hundreds of servants. That painting showing himself as a future adult simply cannot exist unless there is a time-travel subplot in this movie that we all missed. For those of you that still think  Disney’s prime was in the 90s, you can start reevaluating your lives now.

Major Plot hole: When Belle looks into the magic mirror for the first time, she sees her father lost and cold in the woods – searching for her. Instead of asking the Beast to help her by fetching her dying dad – himself or with the help of his magic walking carriage, Belle goes alone in the forest, finds her dad, and then proceeds to bring him to the nearest safe house before he dies of hypothermia, in this case, the Beast’s castle. No, that’s a joke. Belle becomes stupid. She decides to bring him all the way back to her town, consequently adding many more hours of road and cold before her dad can finally rest and escape his imminent death.

Unaddressed Issue: How did no one in the village know about the castle? It’s the equivalent of a magic Burj Khalifa in a forest less than a walking day away from the village. Hell, if the terrain is relatively flat they could probably see the castle from their living rooms. But if no one knows about it, why was there a castle with a young prince and hundreds of servants in the first place? Was the prince immaculately-concepted? Were the villagers paying taxes to the Castle? Did the Disney screenwriter decide to roll another joint and hit the call-girl line instead of thinking this through?

Unaddressed Issue: If there are hundreds of magical household objects in Beast’s castle, where were they when the curse was lifted? The focus was given to the main characters obviously, but wouldn’t the addition of hundreds of human beings in the castle make it look a little more crowded? It was probably a budget concern to not design and animate all those new characters, but as far as the movie goes, we have no indication if they survived. Maybe all the kitchenware went back in their respective shelves after the final fight and unfortunately converted all into humans at the same time inside compact volumes, resulting in the creation of various blood balls of human flesh with sharp corners. My guess is as good as yours.