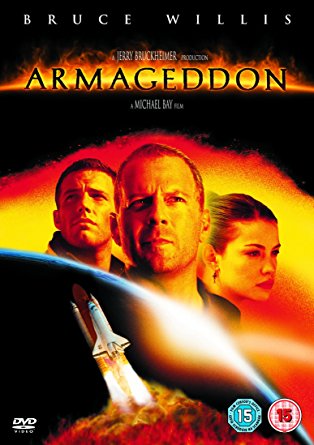 Major Plot Hole: NASA described the asteroid to be the size of Texas (which is about 250 square miles). Such asteroid would have killed all live creatures on the Earth regardless of heroes’ actions. Why? Even it was exploded by putting nuclear weapons inside of it, a lot of chunks would have left the size of the Chixulub meteor (about 6 miles in diameter) that are claimed to cause the extinction of the dinosaurs.

If one of such meteors had struck the planet, the mankind would have died. Several chunks would extinguish the entire life on Earth. Therefore, the plan performed by the group was actually useless: they’d simply turn one fatal impact into several impacts leading to the same results.

Even if they managed to reduce the asteroid to the size of regular meteors, their number would reach millions, or even billions, and reaching the atmosphere they would heat up or even ignite.

Major Plot Hole: If a spaceship could reach the asteroid within less than 1-4 weeks, it would mean that the foreign body was too close to Earth for any plan to destroy and stop it to work.

Minor Plot Hole: It would be much simpler to teach astronauts to drill rather than to teach drillers to be astronauts.

Minor Plot Hole: The events of the film are displayed as being watched and listened by different people in all corners of the world. However, all of them are shown in the daylight.

Minor Plot Hole: We See Harry chasing A.J. all way long the rig with a shotgun trying to shoot him for sleeping with his daughter. He fires at the man a few times. There are many pipes with flammable chemicals and gases, so had Harry shot in one of them, everyone else on the rig would be dead. Was Harry so mad to ignore this fact?

Unaddressed Issue: When Harry fires A.J. he asks Chick, his assistant, to pay men and make them go out. Even if there was a helicopter on the drilling rig waiting for them, it would take several days for Harry’s team to disperse over the planet (they apparently did that, since some of them were shown to be in Asia). However, the scene where these men all over the world are being chased by the US government is impossible to be true, because they evidently flew out from the same airport, and it would take them at least a day to reach various destinations in other continents.