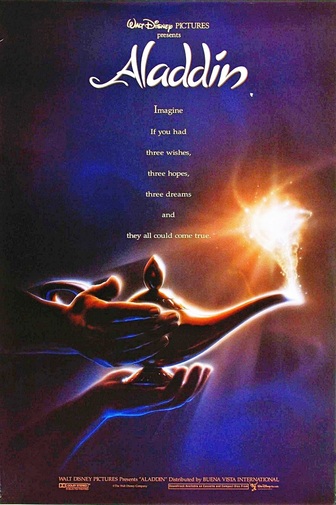 Major Plot hole: Jafar is a moron. He exiles Aladdin from Agrabah – but allows him to keep his very useful and extremely fast flying carpet for an easy return journey.

Major Plot hole: After that easy return journey, Jafar is surprised to see Aladdin alive and yells ‘How many times do I have to kill you boy?!’ Except as we see throughout the film, Jafar makes no effort to kill Aladdin, and merely leaves him in near death situations with easy ways out. Let’s begin:

(1) When the guards throw him in the sea, they let him keep his lamp for an easy escape. (2) Jafar then exiles Aladdin to a snowy mountain with his carpet, as we’ve established, but still could’ve just killed him even if the carpet was gone to avoid any more hassle. (3) During their final battle, Jafar insists on using his deadly magic to turn tigers into kittens, turn monkeys into toys, unravel carpets and make terrible puns. He then puts Jasmine in a giant hourglass (allowing Aladdin plenty of time to save her and a clear notification of when she’ll drown in it) and unleashes a wave of swords at Aladdin, none of which hit him; giving Aladdin a new weapon to fight with. (4) Jafar even breathes fire to surround Aladdin, but none at him to roast him alive. He then turns into a massive snake, has Aladdin coiled in his incredibly strong grip, but doesn’t kill him. Even if he wanted to be a Genie, couldn’t he have killed Aladdin first?

Jafar repeatedly has the chance to kill his enemy but never does because millions of young adults would now be clinically depressed.

Super Plot hole: Jafar has a Snake Staff that can be used to manipulate the actions of other people, rendering his entire plan to use the Genie to make him the ruler of Agrabah completely pointless. Why didn’t he just use the staff to make Jasmine love him? Why didn’t he use it on Aladdin to persuade him to leave or kill himself? Why didn’t he use it to persuade the Sultan to step down from the throne and crown him the new ruler? There’s no explanation for the limits of his staff, at least for weak-minded people like the Sultan, so we can only assume Jafar is mentally unsound.

Plot contrivance: Jafar wishes to become Sultan, so what’s the obvious move for Genie to take? What’s the move that most closely resemble what Jafar asked for? Probably something along the lines of rewriting the laws of Agrabah, alter the minds of its citizens and establish Jafar as the new ruler of the city, of course!

Oh, no, that would be stupid. Genie had a better idea: Covering the city in total darkness, uprooting it from the ground to be placed on a mountain and THEN giving Jafar some second-hand clothes. I don’t recall Jafar wishing for an epic climax Genie !

Plot contrivance: Picture one of your friends right now in usual clothing. Got it? Excellent. Now picture them dressed in fancy robes, a royal hat and cape. Would you still recognize them? Yes. So why does it takes Jasmine so long to even begin to figure out Prince Ali is actually Aladdin?

Plot contrivance: After all the chaotic, crazy shit where innocent people died or watched in terror as giant blue Genie ripped their city into the sky and then lived under the oppression of a magical maniac, Aladdin and Jasmine are finally reunited. Except they can’t marry, because the law that was firmly established throughout the film dictates that they cannot be wed due to their difference in social status – he has to be a Prince.

Oh, sorry, that law was just bullshit. The Sultan very easily dismisses it to allow the star-crossed lovers to be joined in holy matrimony; despite saying earlier in the film that the law says Jasmine has to marry a prince: as if he himself cannot change that. If it was so hard for Jasmine to find a husband, why didn’t he either delay the due date for her marriage or cancel the fucking law like he does at the end? It’s shown he has full control over it, so what was stopping him? Did he not know his own abilities as Supreme leader of his country?!

Plot contrivance: Jafar knew the Genie was essentially his own slave, trapped by the seal of his magic lamp and forced to grant the wishes of his master. Jafar knew this well because he abused Genie and treated him like a worthless servant. Yet Jafar then wishes to be a Genie himself and part of his brain completely switches off – the part that should’ve recalled that a Genie is a slave bound by the lamp and he will end up being the exact same thing.

Unaddressed Issue: The Genie says that Aladdin can use his third wish to become a Prince once again but this makes no measure of sense. What happens when he’s made a Prince again? Does he just get a new set of clothes, or is history completely rewritten to erase the memory of him being exposed as a fake prince?

Unaddressed Issue: Why is Aladdin the only person worthy to enter the Cave of Wonders? Seriously, the cave goes absolutely apeshit when you touch any of its glorious riches inside yet it believes a common thief who steals everything is suitable to enter. It’s similar to a magic elementary school welcoming a Pedo-savior to enter its gym’s locker room while killing everyone else from entering.

Unaddressed Issue: Jafar spends the whole movie wanting to be Sultan, but after two minutes of being the Sultan he wishes instead to be a powerful sorcerer. Why did he think being a hated ruler of an oppressed kingdom was better than being an unbeatable magician? Use your brain, Jafar!

Unaddressed Issue: The mystic blue diamond worn by the Sultan is essential for Jafar’s plan in revealing the person who can enter the cave. But why is this? We never find out. But this is an omgsoamazing Disney Renaissance film so who cares, right?